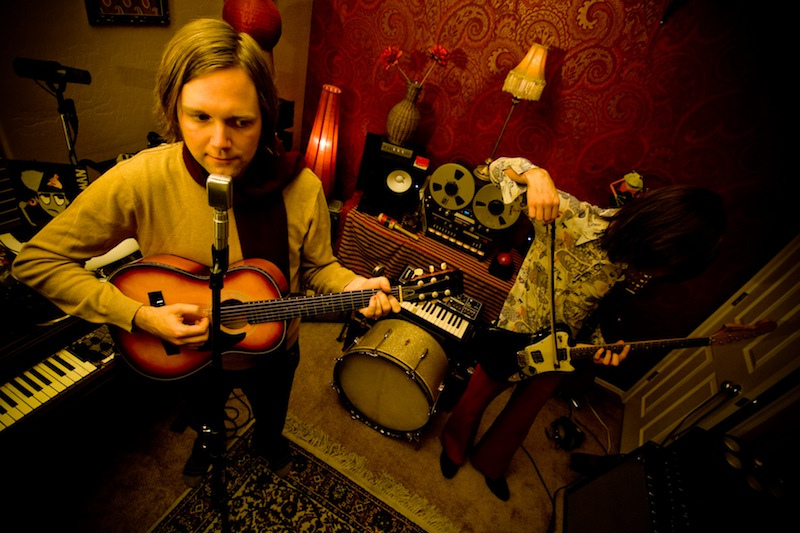 On October 10th, 1996, I went to see Ween perform at the Electric Ballroom in Tempe, Arizona as part of their “12 Golden Country Greats” tour. Before the show started (and before the main concert area had even opened up yet), I was in a small side stage area watching a local act called the Burnlackers perform. Actually, I wasn’t so much watching them as I was repeatedly glancing at my watch, looking at the doorway to the main concert hall, watching the people around me, and then repeating the whole process.

During my cycle of anxiously looking around, I happened to exchange glances with someone who looked like a young Beck Hansen. He had a rather unique look that stood out from the random people filing about in the room. He had thermal long johns under his shorts and t-shirt, the long shirt sleeves and long john legs extending out beyond his shorts and short sleeves. He was glancing around even more nervously than me, I noticed. When he noticed that I was observing him, he got a look on his face like he wanted to become invisible. His whole vibe was self-conscious, but there was something to him that made me want to go talk to him. He looked like a really nice person, if that makes any sense, and he seemed interesting. He didn’t look like everyone else there. The fact that he looked like he was there by himself made me even more eager to strike up a conversation.

I thought better of it, and we never did talk. Soon enough, the show started. As always, Ween played a memorable, and at times insane, set. After I met the band members behind the venue and got some autographs, I got in my car and headed up to Flagstaff to get back to NAU in time to catch a couple hours of sleep before morning classes.

Fast forward to the future. How long? I don’t know. It may have been days, it may have been a month and a half. Either way, the guy I saw at the Ween show and I ran into each other on the internet. I’m not sure where and how and I don’t know if he remembers. I believe it may have been on a Ween newsgroup (alt.music.ween – for those who remember the heyday of Usenet), but I’m not sure. The point is, we got to talking and realized we had actually run across each other at the show. It turned out that we had a lot in common, both in terms of the bands we were fans of, and the fact that we both recorded our own music on homemade setups involving cassette-based 4-tracks.

Not long after I returned home following the end of the fall semester at NAU, we ended up meeting up to work on some recordings together. His 4-track was ancient compared to mine, but he had a ridiculous amount of talent. Pretty much anything I could play him a recording of or I could hum, he’d instantly mimic on his guitar. His head was full of creative ideas, quirky phrases, and a collage of pop culture. He was a fan of The Muppets, the instrumental film scores of Ennio Morricone, and the Japanese electronic music composer Isao Tomita. He had a brilliant mind beyond that of most adults, but this sense of childlike wonder and enthusiasm over everything around him. Stop and think about that combination for a moment. Yeah. Exactly.

In conversation, he was incredibly reserved and his spoken volume level often required me to ask him to repeat himself. He quickly earned the nickname “Quiet Adam” from me. His parents supplied the “Adam” part, I just tacked on “Quiet.” We needed a nickname to differentiate him from the other Adam within the Silverladder circle, Adam Roberts, who then came to be known as “Jazz Adam” or, for the more wild and crazy… Adam Roberts. Upon hearing Quiet Adam mentioned, my friend Ben Thompson (another Silverladder insider) remarked that he wanted “a cool nickname like that.” I reminded him that he was the only Ben in our group. He told me he still wanted a nickname.

Most of our recording sessions weren’t very fruitful, due mainly in part to the fact that my attention span at the time was about 90 seconds long. We certainly did have a lot of fun making some hellatious noise, however. My lack of technical skill, and more importantly my lack of discipline at the time, led to me being less of a collaborator, and more of a proverbial albatross. Therefore, most of his time was spent on his music project KaE-jUn (pronounced “Cajun”). I was interning for MTV’s then-new “all music” network M2 at the time, covering the Phoenix music scene as a local stringer (reporter). I managed to sneak in a feature on KaE-jUn, which actually ended up getting published on the M2 website.

As time went on, Adam and I eventually lost contact somewhere around 2002 or 2003. I often wondered what became of him. I hoped he had continued his music, because the last thing I had heard him working on was a 4-track project that blew my mind. Somehow, this guy was conjuring up results that reminded me of the Beach Boys’ “Pet Sounds” using only his voice, a guitar, and the aforementioned ancient and limited four-track deck. I remember thinking, “He has to do something with this.”

Fast forward to this morning. An email I recently fired off to an old email address of his was answered today. He still checks the old account, but not too frequently. He had wanted to get back in touch as well, and sure enough, he’s still making music. Is he ever still making music. His new project, a duo called The Smiles and Frowns, is in the process of finishing an eight-song effort that is expected to be released initially on vinyl and CD and eventually in MP3 format.

Five of the band’s songs are currently available on their website, including a remake of an old KaE-jUn song, “Sam.” The similarity to certain works by the Beatles from the “Sgt. Pepper’s” era to “Let It Be” is uncanny, without the band coming across as if they’re trying to sound like The Beatles. Portions of various songs bear a striking resemblance to some George Harrison solo tracks as well, especially in the sound of the vocals. For some reason, other moments remind me of Simon & Garfunkel without being overly folky, as Simon & Garfunkel were. The design of the band’s site and the photos on it look like what their songs feel like to me. It all makes sense.

I’m glad he’s still making music. I’m excited to see where it goes from here. Most of all, I’m happy to have run into Quiet Adam again.