In 1994 I was taking “Fundamentals of Speech” at GCU during my freshman year of college. One of the speeches we were required to do was a demonstration speech, wherein we showed how to make something, assemble something, etc. The majority of people in the class decided to demonstrate their favorite recipes. I actually had a hard time coming up with an idea for the speech and ended up deciding to show people how to create an extensive emergency kit for their car. The idea was weak, and the end result proved to be even worse.

Our professor was emphatic about the need for us to use an attention getter to begin our speeches, in order to ensure that the room was focused on us as we spoke. Attention getters varied from famous quotes, to overly dramatic tones of voice, to people just flat out making a loud noise at the start of their speech.

Considering that one of the items in the emergency kit I was assembling was a safety flare, I decided I would light a flare and quote the Boy Scout motto of “Be Prepared” as my attention getter. I had gone through a few test runs of the speech at home and even lit a flare a couple times to ensure I would be able to extinguish it in a bucket of dry sand. During my tests it worked. During my speech, things went differently.

Watch the black bucket to the left of the screen after I (attempt to) grind the flare out in it and continue my speech. You’ll gradually see more and more smoke rising out of it. I noticed it too, and you’ll see how distracted and flustered I was during my speech. That’s not like plain old wood smoke. It’s phosphorus smoke, and it’s very harsh on the eyes and lungs.

What you can’t tell from the video, however, is just how much smoke was filling up the room. It was a lot. And the door to the room was left open, allowing smoke to drift into the hallway and down to other rooms as well. Eventually, a pretty large cloud of phosphorus smoke was filling the building, and all the classes down the hall were evacuated as well. A lot of people were coughing. Many were laughing. A few from another class came up and gave me high fives, because apparently I got them out of an algebra test.

It was all captured on video because our professor would tape our speeches so we could watch them later to self-critique. Little did I know he’d end up catching one of my more embarrassing moments from my freshman year. And the part that I captioned on screen about becoming “one of your horror stories” was me referring to the fact that the professor kept a file of some of the more interesting, outrageous, and disastrous speeches that his students had given over the years.

The good news is, the professor was really cool about the whole thing. I was allowed to make the speech up a week later. And despite what I titled the video, I did end up with an “A” in the course, went on to take several more semesters of speech, and was even asked to join the university speech team.

Finally, yes, that’s really my hair. And yes, I had a goatee. And yes, I really was quite skinny. 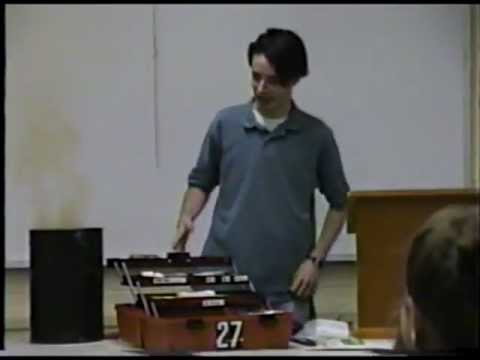