I have very elaborate and fascinating dreams on a regular basis. Actually, calling them “elaborate” and “fascinating” may even be something of an understatement. I am continually amazed by the environments that my subconscious creates night after night. In my dreams, it’s not uncommon for me to be in massive, intricately-designed buildings where every detail is in place, right down to the screws in the light switch plates on the walls. What’s perhaps most interesting about these spaces is that they don’t exist in real life and aren’t places I’ve actually been in the waking world.

Occasionally I keep notes about these dreams and have blogged about them a number of times before. I have a “dreams” category on this blog, and there’s even an archive of some of my old dreams up at Silverladder.

I’d like to get back into the habit of routinely journaling these dreams once again. However, there are two obstacles which sometimes get in the way of doing this. The first is simply an issue of not always remembering enough of the prior night’s dreams to justify them getting their own blog entry. The second problem is that in order to best remember my dreams, I need to at least scribble down a few notes about them immediately upon waking from them. This would require me to be writing by flashlight in a notebook kept on my nightstand, which is neither conducive to a good night’s sleep nor beneficial to a harmonious relationship with the beautiful young lady attempting to sleep next to me.

At an early/middle point in my dream(s) last night, I was doing maintenance on a series of six aquariums that were sitting on a shelving unit. There were two aquariums per shelf, side by side, and three shelves total. Someone pointed out to me that one of the fish was on the ground, several feet away from its aquarium. As I picked it up and went to put it back in its correct aquarium, I noted that the aquarium it came from was empty, despite having been previously full of fish. I deduced that a flood the prior day had risen high enough in the room that it washed the fish out of the aquariums in the two bottom shelves, relocating them elsewhere.

Meanwhile, on a higher shelf, I noticed another fairly large tank that was empty as well. However, next to it was a smaller aquarium, that contained two very large fish. The fish, a red oscar and a Jack Depmsey had grown unusually large, and were far too big for the tank they were in. There was barely enough room for either one to turn around. I also noticed that the Jack Dempsey was changing its shape, morphing from a fish into a grotesque, almost hand-like shape, with a completely unusual bone structure for a fish. Despite its shape changing, it retained its exterior, and its Jack Dempsey color scheme. 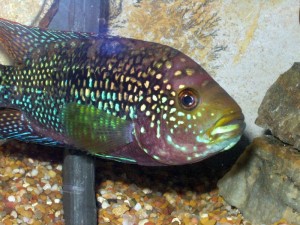 Later in the dream, I was walking through a parking lot, smoking a cigarette and weaving in and out of parked cars. I ran into some members of my family who were heading across the parking lot. One of them handed me a huge, cumbersome blanket and asked me to hold it for them. They told me to come along with them but wouldn’t tell me where they were going. I asked a few times, but no one would answer my question about where we were going. Eventually we arrived at the entrance to a building that looked like a television or movie sound stage. A line of people was in the process of entering the building ahead of us.

Just as we made our way to a set of double doors, a woman monitoring them closed the doors and told us we were too late. She informed us we would have to wait until the “tour guides” showed up to let us in. I remember being disappointed that we weren’t let in and thought that if we had traveled more quickly across the parking lot, we would have made it in time. I still had the blanket, which had become something of a nuisance. I kept looking for someone to hand it to, but they insisted that I hold on to it. I thought that it was ridiculous that I had it and would be carrying it with me when we went inside. I knew there was no need for me to have it.

Eventually we were let into the sound stage. There was a performing stage inside, and an audience area comprised of bleacher-style seating. I found a seat as quickly as I could, but wasn’t able to sit down until a few seconds after the members of my family had been seated. The cast was on the stage, sitting on stools. One of the cast members admonished me for not finding a seat quickly enough, and admonished the group of us for being late. He let us know that those who arrive early or on time would receive a bowl of soup, and that it would be completely full. Meanwhile, we would not be receiving a very full bowl of soup, if we even got any at all. I remember feeling like the whole situation, from the blanket, to being late, to being admonished and denied the bowl of soup, seemed completely unnecessary and kind of irritating. The dream ended at this point.

Note: Although it was never announced or written anywhere, I was aware that the sound stage we were at was the location of a “Wallace and Ladmo” musical tribute. It is common in my dreams for me to just “know” something without it having been declared by anyone or anything in my dream.